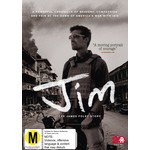 On Thanksgiving Day 2012, American photojournalist James "Jim" Foley was kidnapped in Syria, two years before the infamous video of his public execution introduced much of the world to ISIS. JIM: THE JAMES FOLEY STORY, directed by close childhood friend Brian Oakes, tells the story of Jim's life through intimate interviews with his family, friends and fellow journalists - while former hostages reveal never-before-heard details of his captivity with a chilling intimacy that reveals their courageous untold story of perseverance. Made with unparalleled access (including footage Foley shot himself), and using carefully rendered recreations, Oakes takes viewers deep into the darkness and valor of Jim's captivity. What emerges is a powerful chronicle of bravery, compassion and pain at the dawn of America's war with ISIS.