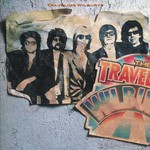 The Wilburys formed in 1988 after Dylan, Harrison, Petty, Lynne and Orbison assembled at Dylan's Malibu, California studio to record a B-side for the Harrison single "This Is Love". The resulting song, "Handle With Care," was instead released under the Wilburys name, with the artists posing as a band of brothers. The original album release, Traveling Wilburys Vol. 1, achieved great success; after hitting No. 3 on the Billboard Top 200 chart, the certified double Platinum album earned a GRAMMY® for Best Rock Performance by a Duo or Group.