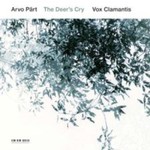 The second ECM New Series album to fully showcase Estonian vocal group Vox Clamantis is devoted to compositions by their great countryman, Arvo Pärt - whose music has been the most performed globally of any living composer over the past five years from his 75th birthday leading up to his 80th last September.

This album - titled 'The Deer's Cry' after its opening track, an incantatory work for a cappella mixed choir - is also the latest in a long, illustrious line of ECM New Series releases to feature Pärt's compositions, the very music that inspired Manfred Eicher to establish the New Series imprint in 1984. Along with such classic works as Da Pacem Domine, the new album includes first-time recordings of the a cappella pieces Drei Hirtenkinder aus Fátima and Habitare Fratres. There is also an a cappella version of Alleluia-Tropus, which Vox Clamantis previously recorded alongside instruments for the Grammy Award-winning ECM New Series album 'Adam's Lament'.

"Occasionally a new release comes along that, because of its uniqueness, or particular sonic character, or some other strange yet compelling power, invites-or perhaps demands-a particular kind of listening, one that requires just sitting back and closing the eyes, letting the music just "happen"-as opposed to making notes and reaching for comparison performances. This is one of them....this is just the sort of recording that anyone new to his music should hear, and for them-and anyone who loves beautiful music and first-class choral singing-the rewards of listening will at least temporarily override my above concerns about documentation. And besides, if your eyes are closed, who's reading anyway? Strongly recommended." ClassicsToday 09/10

"With translucent sound and transcendent performances, this is another Arvo Pärt disc to add to ECM's already essential catalogue from this composer." MusicWeb

"This is an important and highly rewarding release. It clearly has the approval of the composer, who is pictured at the recording sessions" Gramophone

"The level of artistry necessary to achieve the kind of living, breathing performance given here by the Estonian choir Vox Clamantis is a rarity…conductor Jaan-Eik Tulve [is able] to infuse the apparently simplest of settings with vibrancy…this grippingly authentic and superbly sung collection may now be the finest single-disc introduction to Pärt's music" BBC Music Award Finalist 2018 Choral