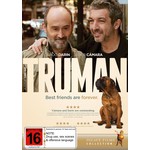 Two of the greatest talents in modern Spanish cinema Ricardo Darin (Wild Tales) and Javier Camara (Living Is Easy With Eyes Closed) take centre stage in the multi award-winning new film from Cesc Gay, the director of 2014's A Gun In Each Hand. A smash hit success in its home nations, TRUMAN is a funny, heartfelt portrait of friendship, and life's unexpected ups and downs.

When theatre actor Julián (Darín) receives an unexpected visit from his childhood friend Tomás (Cámara), the encounter is bittersweet. This reunion is their first meeting in many years, triggered by Julian's failing health. Tomas is baffled by his friend's decision to forgo treatment and instead focus on putting his affairs in order: distributing possessions, reconciling past disputes, and, most importantly, finding a home for his beloved Boxer, Truman. It's this task that is causing Julián the greatest concern.

With characteristic understatement and sensitivity, Gay finds great dignity and humour in ordinary lives, delivering a witty, moving and hugely entertaining reflection on human connection, and a reminder that the best friendships are, indeed, forever.

"A gentle, wise and beautiful film...A quiet humour suffuses this tender insight into the importance of friendship." David Stratton, THE AUSTRALIAN

"Wonderful, a lot of fun. Very thoughful and reflective, very funny too. A film with a light touch, full of moments that show more than tell." Jason Di Rosso, ABC RADIO NATIONAL