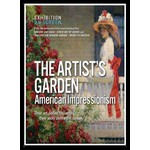 Exhibition On Screen: The Artist's Garden

Taking its lead from French artists like Renoir and Monet, the American impressionist movement followed its own path which over a forty-year period reveals as much about America as a nation as it does about its art as a creative power-house.

It's a story closely tied to a love of gardens and a desire to preserve nature in a rapidly urbanizing nation. Travelling to studios, gardens and iconic locations throughout the United States, UK and France, this mesmerizing film is a feast for the eyes.