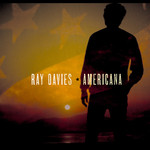 The 15-track collection of originals serves as a master-crafted return for one of the most acclaimed and iconic songwriters of the past 50 years, and follows Davies' 2013 memoir of the same name, using the book as both source material and creative catalyst. Davies enlisted The Jayhawks as backing band, and recorded the album in London at Konk, the studio founded by The Kinks in 1973.

"Americana" was written, conceived, and arranged, by Davies, and co-produced with Guy Massey and John Jackson. The album is an autobiographical work, chronicling the inextricable role America has played in Davies' life. From his earliest days touring the U.S. with the Kinks and subsequent blacklisting by the American Musicians Union, to his years playing stadiums and eventually settling in New York and New Orleans for a time, America has served as both muse and tempest to Davies.