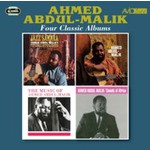 Ahmed Abdul-Malik began taking musical lessons from a very early age and was enrolled in the Vardi School of Music where he was taught violin, viola, piano, cello, bass and tuba. He began his professional musical career playing hard bop bass before recording a string of ground breaking Middle Eastern flavoured albums where he was featured playing the oud (a double stringed, unfretted Middle Eastern lute). This blend of jazz and Middle Eastern music became very popular at the time and the albums which we feature here on our 2CD set were critically lauded at the time and over the years have come to be appreciated as way ahead of their time in their blend of jazz and what we now call "world music". Artists Malik has played with include John Coltrane, Johnny Griffin, Randy Weston, Art Blakey and Thelonious Monk.