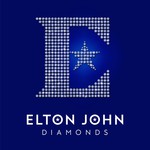 'Diamonds' is the ultimate greatest hits collection from Elton John.

Kicking off with the ever-stunning 'Your Song', this definitive collection brings together all the landmark hits of one of the greatest song books of all time, including 'Tiny Dancer', 'Rocket Man (I Think It's Going To Be A Long, Long Time)', 'Candle In The Wind', 'Don't Go Breaking My Heart', 'Sacrifice', 'Can You Feel The Love Tonight' and Elton's duet with George Michael on the classic 'Don't Let The Sun Go Down On Me'.

'Diamonds' coincides with the 50th anniversary of Elton's phenomenal songwriting partnership with Bernie Taupin. Meeting in 1967 through a music magazine advert seeking songwriters, Elton and Bernie went on to become one of the most enduring songwriting duos of all time, achieving a sustained level of success that puts them head and shoulders above the competition. Catapulted into the limelight as a songwriting force in 1971 with 'Your Song', the duo never stood still creatively, defining an era with their run of back-to-back classic 1970's albums. While 'Candle In The Wind' topped the charts in three different decades and 2016's critically acclaimed 'Wonderful, Crazy, Night' was a top ten hit in the UK, their legacy is one that is unrivalled in terms of longevity, creativity and commercial success.

Speaking about their relationship, Elton says: 'We are at 50 years, and our relationship is healthier than it's ever been. There have been times in our relationship when we've written with other people, but it still didn't stop the love. I love Bernie more than I've ever done and I think he probably feels the same way about me, because we've both led separate lives; we both write in separate rooms. We have an amazing respect and love for each other that's only grown.'

Bernie Taupin says: 'We still get a kick out of what we do; it's what we do - when we come together and write something, it still has that magical quality to it - it doesn't get any better than that. That feeling hasn't aged.'

LP1
1. Your Song
2. Tiny Dancer
3. Rocket Man (I Think It's Going To Be A Long, Long Time)
4. Crocodile Rock
5. Daniel
6. Saturday Night's Alright (For Fighting)
7. Goodbye Yellow Brick Road
8. Candle In The Wind
9. Bennie And The Jets
10. Someone Saved My Life Tonight