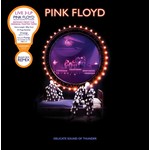 After Roger Waters departure from Pink Floyd in 1985, remaining members David Gilmour and Nick Mason decided to continue. The massive 155-date world tour that they embarked on in 1988 in the wake of the success of the Momentary Lapse Of Reason album featured one of the most spectacular live shows ever put together.

With state-of-the-art lights and lasers perfectly synchronised with the music, a stage festooned with huge inflatable beds and pigs and a band featuring up to 10 musicians (including former keyboardist Rick Wright), it all had to be organised and executed with military precision.

The audio for this reissue has remixed from the original multi-track tapes by longtime Pink Floyd engineer Andy Jackson with Pink Floyd's David Gilmour, assisted by Damon Iddins. This triple LP set features the remixed audio and offers nine more tracks than the original.