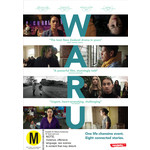 Eight female Māori directors have each contributed a ten minute vignette, presented as a continuous shot in real time, that unfolds around the tangi (funeral) of a small boy (Waru) who died at the hands of his caregiver. The vignettes are all subtly interlinked and each follow one of eight female Māori lead characters during the same moment in time as they come to terms with Waru's death and try to find a way forward in their community. In Māori, waru means eight.

"A sisterhood of Māori female directors bravely share their insights into the complexity of child abuse, in a sequence of eight short films that seamlessly become one. At the centre of their stories is Waru, a boy killed at the hands of a caregiver. His tangi, set on a small rural marae, is the centrepiece of the film, but there is an underlying disturbance of heavy themes touching on culture, custom and shame.

We see a single death through the differing lenses of the extended family, community, and in one sharp sequence, national media too. Waru weaves multiple reactions and offers a glimpse into the events that ensue upon the killing of a child and the conflict created among loved ones.

As Waru's grandmothers, Kararaina Rangihau and Merehake Maaka deliver electrifying performances, demonstrating their skill in the art of karanga. As their wailing and laments call on their ancestors to safely take their mokopuna, a challenge for his body unfolds.

Māori humour isn't absent, and neither are the subtexts within the banter, leaving me to wonder if our ability to laugh in times of sorrow is a cloak to mask our pain. Antonio Te Maioha and Miriama McDowell are powerful in challenging roles, which left me questioning if I would have the same courage to intervene.

The subject could hardly be heavier, but this is a hugely important film. Unless we are willing to be tested, we have no chance of reducing our shameful child abuse rate here in Aotearoa. It's a film everyone in the family should see and talk about." - Mihingarangi Forbes, Māori Issues Correspondent, RNZ/The Hui