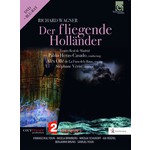 Filmed at a series of outstanding performances at the Teatro Real de Madrid in December 2016, this recording will especially delight lovers of Wagnerian music drama with its faithful reflection of the grandiose staging of Àlex Ollé, a member of La Fura dels Baus, whose earlier productions have attracted widespread attention. A conductor equally at home in Monteverdi, Boulez, Praetorius and Schumann, Pablo Heras-Casado can rely on a cast totally committed to this breathtaking musical hurricane!

"As you'd expect from a Fura dels Baus show, there's an impressive scenic grandeur on display … an undeniable intensity in Samuel Youn's exchanges with Ingela Brimberg's Senta, who fills out her phrases impressively...Pablo Heras-Casado conducts a swift, efficient account of the score, played well enough by the Madrid orchestra, but doesn't really plumb the depths. Nor, ultimately, does the production. On its own terms, though, it's an impressive and engaging show." Gramophone