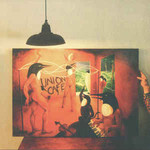 Union Cafe was the fifth, and the last studio album by Penguin Cafe Orchestra. It was initially released in 1993.

It was 1972 in the South of France when Simon had an unfortunate experience with food poisoning which lead to a much more fortunate circumstance when a vivid dream, induced from his illness and depicting a dystopian future, conceived the Penguin Cafe; a charming place where solace, harmony, and the orchestra's unique music could be found amidst brutal concrete structures and darkness. For the following 25 years, Simon carried out this vision bringing brightness into a world full of noise. Sadly, after his passing, the original orchestra disbanded, but the doors to this happy place reopened when his son Arthur decided to continue his father's legacy under the name Penguin Cafe.