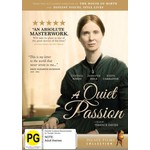 Born into privilege in 1830, Dickinson spent most of her life on her parents' estate in Armherst, Massachusetts. In her youth, the introverted Emily is depicted as a fiercely intelligent young woman who exchanges forthright opinions on life, art and patriarchal society. She becomes more reclusive as the years pass, consumed by poetry, but the lack of recognition and respect for her work stokes ever more vociferous dissention.

Living up to The Guardian's assertion that he is Britain's greatest living director'm Terence Davies creates a stunning portrait with A QUIET PASSION, a film which may just be the perfect match of filmmaker, actress and subject.