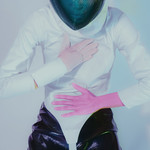 The delightfully shape-shifting album filters real-deal serious themes such as "What are we consuming? How is it affecting us, and why does everything feel so bad and weird sometimes?" through a vibrant sonic lens that spans battered drum-machine funk, doomy and thrashing rock, and pink-hued psychedelic disco. It's not a dark record, per se. Even the album's title, Sex & Food, focuses on two of the most undeniably pleasurable experiences in life; positivity despite the strangeness of our times.

Sex & Food was recorded in a variety of locales from Seoul and Hanoi to Reykjavik, Mexico City, and Auckland, not to mention Nielson's home base studio in Portland. It is a practical musical travelogue, traversing the world as well as a wide spectrum of human experience. Nielson grapples with new, sometimes dismal realities, but succeeds in pulling the epiphanies from the chafe.

1. A God Called Hubris
2. Major League Chemicals
3. Ministry of Alienation
4. Hunnybee
5. Chronos Feasts on His Children
6. American Guilt
7. The Internet of Love (That Way)
8. Everyone Acts Crazy Nowadays
9. This Doomsday
10. How Many Zeros
11. Not in Love We're Just High
12. If You're Going to Break Yourself

Whistle Down The Wind