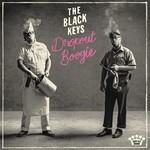 After 10 albums, six Grammy awards, and sold-out tours around the world, The Black Keys are back: The duo, releases its eleventh studio album, Dropout Boogie, on May 13 via Nonesuch Records. The first single, "Wild Child," comes with a video directed by the band's longtime collaborator Bryan Schlam.

Dropout Boogie will be released one day before the twentieth anniversary of The Black Keys' first album, The Big Come Up. As they have done their entire career, the duo of Dan Auerbach and Patrick Carney wrote all of the material in the studio, and the new album captures a number of first takes that hark back to the stripped-down blues rock of their early days making music together in Akron, Ohio basements.

"That's always been the beauty of the thing Pat and I do. It's instant," Auerbach says. "We've never really had to work at it. Whenever we'd get together, we'd just make music, you know? We didn't know what we were going to do, but we'd just do it and it would sound cool. It's the natural chemistry Pat and I have. Being in a band this long is a testament to that. It was a real gift that we were given. I mean, the odds of being plopped down a block-and-a-half from each other in Akron, Ohio-it just seems crazy."