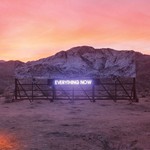 EVERYTHING NOW was produced by Arcade Fire, Thomas Bangalter and Steve Mackey, with co-production by Markus Dravs; and was recorded at Boombox Studios in New Orleans, Sonovox Studios in Montreal, and Gang Recording Studio in Paris.