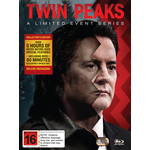 One of the most groundbreaking and influential television series of all time, the new showtime series picks up twenty-five years after the inhabitants of a quaint northwestern town were stunned when their homecoming queen Laura Palmer was shockingly murdered.

The new Twin Peaks is written and produced by series creators and executive producers David Lynch and Mark Frost and is directed entirely by David Lynch. This collection includes all 18 parts of the Showtime series, plus a wealth of exclusive, behind-the-scenes special features that will show fans what's behind the red curtain and the making of this extraordinary television event.