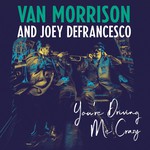 Van Morrison And Joey Defrancesco
You're Driving Me Crazy

Like his last two albums, "You're Driving Me Crazy" includes reworked jazz and blues classics (Peter Chatman's 'Every Day I Have The Blues', Eddie Jone's 'The Things I Used To Do', Cole Porter's 'Miss Otis Regrets' alongside tunes from throughout Morrison's discography ('The Way Young Lovers Do' from Van's 1968's "Astral Weeks", through the title-track to 2005's "Magic Time").