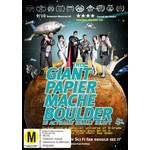 While watching an old B grade movie, three ordinary guys Gavin, Tom and Jeffery, get sucked into a parallel universe of b grade sci fi. Now at the helm of a rickety old spaceship, they embark on a perilous quest to get themselves home. To make matters worse one of them starts to think he is a sci fi character. If they all start to lose themselves, then they will be lost in this place forever. Evil warlords, Giant lizards, sexy amazons, and enough space action for 3 life times. Yes the guns may look fake but the action is real and will kill you if your not careful. For all lovers of sci fi and fun comedy. This is a truly epic adventure you won't ever forget.

Clever clogs Christian Nicolson (producer/director/writer) and Andrew Beszant (writer) decided to realise their dream of writing a Sci-fi comedy and entered the Make My Movie competition in late 2011. Their love for old Sci-fi such as Star Wars, Battlestar Galactica, Blake's 7, Doctor Who and many many others inspired them to write this hilarious movie. The prospect of this excited the public and judges and pushed them through the various knockout rounds of the competition. The script and dedication of the team startled the judges so much that it earned them a glorious 2nd place out of over 750 teams. Stubborn and naive, regardless of the odds, they were determined to continue this project through till the end on a low budget as it was intended.

This NZ film has gone on to win heaps of awards including Best Comedy at the Boston, London and Miami Sci Fi Film Festivals and Supreme Award at the Starburst Festival.

"If it happens to play anywhere near you, don't pass up on the chance of seeing it. Seriously, you'll be missing out on your next favourite cult movie." - Martin Unsworth - Starburst Magazine

"The biggest surprise of this year's Boston SciFi - The audience loved it! It could easily become a breakout." - Boston Sci-Fi Film Festival Director

"It's easily one of my favourite kiwi films ever. I actually already want to watch it again" - Karl Burnett

"Let's face it, who hasn't tried to use the force" - Christian Nicolson - Writer/Director/Producer

"Very funny and I enjoyed it immensely. I cackled away the whole time" - Peter Elliot