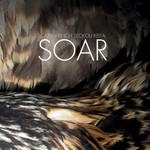 Soar takes flight on the wings of the osprey, the magnificent bird of prey, which makes its annual 3,000-mile migration from West African coasts to the estuaries of Wales, soaring like music over man-made borders on an epic journey of endurance.

The music explores themes of migration and journeys, both emotional and physical, exploring and celebrating the parallels and differences between the Welsh harp and the West African kora and their cultures.

The harp occupies a vital place in the incredibly rich cultures of both West Africa and Wales, and both nations share a centuries-old bardic tradition of intricate oral history, expressed through music, song and verse.

"This ingenious duo have let fly with their second set and released a remarkable album of such texture and prowess that at points its scope, concentrated into the workings of two masters of their instruments, takes the breath away. The pacing, structure, packaging and context, including inspired liner notes from Andy Morgan, is all impeccable and it all combines to result in a truly inspired, beautifully conceived project." Folk Radio

"Senegal and Wales share few obvious similarities, but Seckou Keita and Catrin Finch, respectively maestros of the kora and classical harp, have found an enchanted middle ground between their birthplaces and traditions. Arriving some five years after an acclaimed debut, Clychau Dibon, this second album weaves much the same magic, taking as its motif the osprey, the sea bird that migrates between west Africa and northern Europe. "They know where they will find peace and happiness," says Keita. "I've been on the same journey myself, but in a different way."

The exultation of flight is captured on opener Clarach, kora and harp cascading around each other intricately, while the enforced migration of slavery is addressed in 1677, a darker, bluesier piece referring to the infamous slave station of Goree - though even here the playing is gloriously airborne. Bach to Baïsso begins as an extract from Bach's Goldberg Variations before flipping into an antique Senegalese tune with griot chants; a daring but successful leap. The pair take turns to supply an underlying riff or play lead, but the interplay between their instruments is seamless, and testimony to their years working together. Hypnotic and ethereal, Soar is a unique marriage of cultures." - The Guardian

Light Upon The Lake