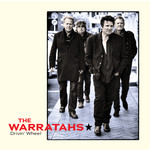 For over 30 years The Warratahs have carved a niche into the New Zealand landscape - literally from North Cape to Bluff, becoming legendary for extensively touring both small towns and cities alike.
This year New Zealand's greatest country music band celebrate the 30th Anniversary of their debut album "The Only Game In Town".

Winning the Country Music Album Award for 1988 and receiving a Gold Award for sales, the album included songs that have long become well known favourites - "Hands Of My Heart", "Maureen" and "The Only Game In Town".

To honour the occasion, The Warratahs release
"Drivin' Wheel", a 24 track compilation spanning 1988 to the present day, including the new song "Fast Train".

"Barry Saunders sings about the changes that happen around us, changes we can do nothing to prevent, as well as the ones that take place inside. And he does it better and more recognisably than just about anyone." - Nick Bollinger RNZ