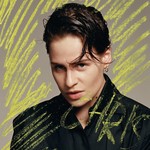 Christine and the Queens
Chris

Christine and the Queens, the synth-pop project of French musician Héloïse Letissier, is back with a new album.

Following up her French Number 1 and UK Number 3 self-titled album, which contained the hit single 'Tilted' (Helped in part by her amazing live performance on the Graham Norton Show) Héloïse Letissier delivers another album of what she describes as "freakpop."

Once I Was An Eagle