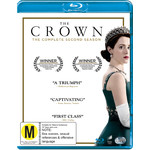 With the world undergoing great changes, a damaged British monarchy must confront its past in order to have a future. As a new era begins, Queen Elizabeth struggles to navigate a world that's changing around her while preserving both the monarchy and her marriage.

The Crown was named Best Drama at the Golden Globes, this acclaimed series netted Emmy Awards for stars Claire Foy and John Lithgow.