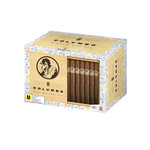 An amazing collector's edition featuring every Columbo case. He's the disheveled detective, dismissed by his suspects as an erratic pest, but little do they know this keen investigator is lulling them into a false sense of security. Voted as one of the top TV detectives of all time, Columbo turned the mystery genre on its head by revealing the perpetrators of crime at the very start of each episode. The 54 disc set includes the complete Columbo casebook.