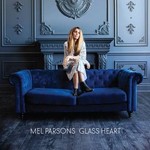 Mel Parsons' fourth album Glass Heart is a bold and beautifully crafted body of work, which sees her revealing a darker and fuller sound, while still retaining her trademark poignant storytelling.

. "I had been wanting to work with Mitchell for a few years, so when our schedules finally aligned things happened pretty quickly," says Parsons. "Mitchell and I had first been in touch back about working together back in 2015, but I've admired his work for a long time - he has produced some of my favourite albums."

"You hear about how amazing these people are - and obviously by reputation you know that they're operating at a really high level - but it wasn't until we started working on the songs and got into the studio that I experienced Mitchell's quiet genius firsthand."