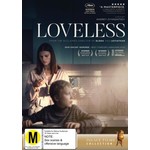 The searing, multi award-winning new drama from Andrey Zvyagintsev (Leviathan, Elena, The Return), arguably the most fearless and vital filmmaker in modern European cinema, LOVELESS is a razor-sharp and gripping portrayal of a family and society on the precipice of collapse.

Boris (Alexey Rozin) and Zhenya (Maryana Spivak) live together in the same Moscow apartment, but their relationship is all but over. Caught in a spiral of slanging matches and eager to be freed into the company of new lovers, the only thing keeping them together is the still-to-be-finalised sale of their apartment. What this means for their 12-year-old son, Alyosha (Matvey Novikov), doesn't seem to be of primary concern. But when he doesn't return home one night, the couple are confronted by ambivalent and resource-strained authorities, and must mount their own independent search... one that forces them to confront their fears, past actions and complacency.

Shot with trademark precision, his stately compositions paired with taut moral narratives of greed and injustice, Zvyagintsev again proves to be the pre-eminent chronicler of his country's 21st century malaise. Earning rave reviews at Cannes, where it topped the Screen International jury poll as best of the festival, LOVELESS is a powerful and essential cinematic experience.

"Impressive. The film of the week. Unflinching, astutely obsevered, a masterful chronicle of corruption and moral decay. Zvyagintsev's thoughtful film switches the focus from the collective back to his two protagonists in a way that avoids facile nihilism, suggesting that even in bleak times, individuals have the power to act virtuously if they choose. Spivak and Rozin's masterful portrayal of two individuals coming undone is in part so devastating because the characters themselves are largely to blame. Recommended" - Jason Di Rosso, ABC RADIO NATIONAL

"Zvyagintsev has produced another masterpiece. A stark, mysterious and terrifying story of spiritual catastrophe: a drama with the ostensible form of a procedural crime thriller. It has a hypnotic intensity and unbearable ambiguity which is maintained until the very end. This is a film which confronts us with the most unthinkable of crises and perhaps also challenges the eternal piety and complacency of family life, that having children is a moral verity and duty which is somehow its own reward, which elevates by its very nature and goes beyond the requirement to show and to give love. But the cultivation of love needs the right conditions, the right soil in which to grow, and the Russia of Zvyagintsev's film looks barren. Loveless may not have the obvious grandeur and reach of his previous film, Leviathan, and is closer to the mordant domestic drama of Elena. But its brilliance and passion are compelling."
Peter Bradshaw, THE GUARDIAN