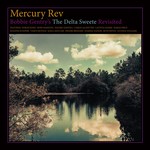 On the 1968 LP, Gentry opened with a call to jubilant order, "Okolona River Bottom Band," like she was leading a barn-dance union of the early Rolling Stones and Louis Armstrong's Hot Five. Norah Jones takes that entrance here with her own sultry command, like Sarah Vaughan at the head of a slow-blooming choir. In "Sermon," Price-who has known real struggle up close-sings like a survivor through Mercury Rev's explosion of colour and groove: a specialty throughout the band's history as recently as 2015's The Light in You, going back through All Is Dream in 2001, the whirling iridescent soul of 1995's See You on the Other Side and the sumptuous turbulence of the 1992 single "Car Wash Hair."

Gentry is still very present in the changes. Her seesaw of pride and hurt in the melancholy blur of "Penduli Pendulum" ("When goodbye serves as/My one amusement") is even more explicit with the seasoned intimacy of Vashti Bunyan-a once-elusive voice from Britain's psychedelic-folk boom-set against the younger, brighter arc of Kaela Sinclair, now in the electronic project M83. And in "Courtyard," a despairing finale of strings and guitar arpeggios on Gentry's LP, Mercury Rev build a striking Delta Krautrock in which the English singer Beth Orton wanders, like Gentry, through a ruin of profound loss and treasured memory.

"Ode to Billie Joe" was not on the '68 Delta Sweete. But Mercury Rev go back to that dinner table with Lucinda Williams of Lake Charles, Louisiana, and it is an inspired bond, calling up the ghosts and questions of a South still very much with us. Indeed, Gentry-who retired from recording and performing in the Seventies-reportedly lives only a couple hours' drive from the bridge that made her famous, while the spirits she set loose in The Delta Sweete are as restless and compelling as they were 50 years ago. This album is a loving tribute to that achievement, one of the greatest albums you have never heard. It is also a dozen new ways to walk that land.