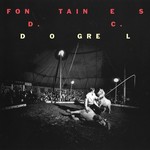 Assembling whilst still at college in Dublin a few years ago, from the ruins of early nowhere bands, and having discovered a shared love of poetry and a common zeal for authentic self-expression, the evolution of Fontaines D.C. has been swift, sure and seemingly effortless.

Fontaines D.C. have released four critically acclaimed singles, all of which garnered considerable support both from radio and from a vast range of international press, with the band featuring in a number of end of year lists and receiving high praise from the likes of NPR, Rolling Stone, Q, NME, Clash, Stereogum, and more.

Dogrel is a debut which is best enjoyed as a whole; it is very much in the grand tradition of the album as art form, just as this is a band very much in the classic band mould: great singles, an indefatigable work ethic and an utter aversion to standing still.