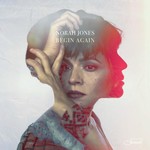 Begin Again is a collection of singles that gathers seven eclectic songs that Norah Jones recorded over the past year with collaborators including Jeff Tweedy and Thomas Bartlett.

Last year, following the 2016 release of her acclaimed album Day Breaks Jones quietly returned to the studio with the sole intent of following her muse down creative pathways without any expectations or boundaries. Reveling in the joy and spontaneity of music-making with a true spirit of openness, Jones got together with various friends for brief, largely-improvised sessions to collaborate and experiment. The singles Jones began releasing last summer ran the gamut from riveting electronic experiments to starkly acoustic folk ballads to organ-and-horn drenched soul songs. With the addition of three more previously unreleased songs, Begin Again presents seven snapshots of creativity from one of the music world's most versatile and consistently intriguing artists.