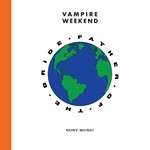 Vampire Weekend
Father Of The Bride

Father Of The Bride closes the six-year gap since 2013's 'Modern Vampires Of The City.' In addition to touring the world and winning a Best Alternative Grammy during this period, Ezra Koenig also co-wrote and produced Beyonce's 'Hold Up,' all the while soaking up the experiences and observations that shape Father of The Bride.

In typical Vampire Weekend fashion, the title "Father Of The Bride" has multiple layers of meaning, expressing the band's signature paradox: creating songs that easily find a home on any playlist but reveal their complexities upon closer listening.

Father of the Bride is full of guest stars - including Rostam Batmanglij (who left the band in 2016) and "This Life" includes backing vocals from Danielle Haim.

I Am Easy To Find