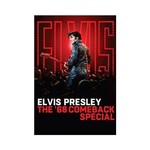 Elvis Presley rocked the world in the '50s, a leader among performers who brought about a revolution in music and pop culture. Through most of the '60s he concentrated mainly on his movie career. By 1968, it had been more than seven years since Elvis had appeared on stage in front of a live audience.

In his first television special Elvis plays his greatest role - simply being himself, the real Elvis as performer and person. Usually referred to as The '68 Special or 'The '68 Comeback Special', the actual name of this landmark television program was 'Elvis'.

Taped in June 1968, it first aired the following December 3rd on NBC-TV, attracting 42% of the television viewing audience, the network's biggest ratings victory that year and the season's top-rated show.

It stands as one of the great moments in rock music history and as a stunningly brilliant milestone in Elvis Presley's career.

Show Opener:
Trouble / Guitar Man
Lawdy, Miss Clawdy
Baby, What You Want Me to Do
Something Wrong With My Lip / He's Gotta Be Crazy
Heartbreak Hotel / Hound Dog / All Shook Up
Can't Help Falling in Love
Jailhouse Rock
Can I Borrow Your Little Whatchacallit? / This Leather Suits Hot
Love Me Tender
Are You Lonesome Tonight?
Rock & Roll Music Is...

Gospel Production Number:
Sometimes I Feel Like a Motherless Child / Where Could I go but to the Lord / Up Above My Head / Saved
Baby, What You Want Me To Do
Blue Christmas
Man, I Just Work Here / No Strap
One Night
Memories

Show Closer:
If I Can Dream