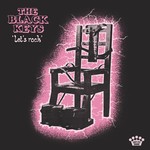 "Let's Rock" is the ninth studio album from The Black Keys.

The city of Akron is a silent partner, a third member on a recording that returns the duo to the straightforward, primitivism of their early canon, back to those days when Carney worshipped the Stooges, and Auerbach was enamoured with Link Wray and the original James Gang guitarist Glenn Schwartz.

After the nuanced, pensive psychedelic melancholy of 2014's Turn Blue, perhaps the biggest factor in the sound of "Let's Rock" was that Auerbach and Carney fell back in love with the electric guitar co-producing an unpretentious blues worshipping assault record that reminds you that rock is supposed to be unpredictable, dangerous, and in your face.

"Let's Rock" was written, tracked live, and produced by Auerbach and Carney at Easy Eye Sound studio in Nashville and features backing vocals from Leisa Hans and Ashley Wilcoxson.

Waiting On A Song

Down The Road Wherever