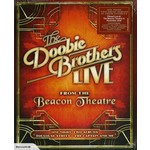 The Doobie Brothers
Live From The Beacon Theatre (Blu-ray)

In November 2018, The four-time Grammy Award winning band returned to the Beacon Theatre for the first time in 25 years to perform two of their landmark albums, 'Toulouse Street' and 'The Captain and Me'.

This historic performance at the Beacon offered an opportunity for Doobie fans to hear deep cuts and songs never-before performed live by the band, such as "Mamaloi," "O'Connelly Corners," "Ukiah," and "The Captain And Me." The show begins with the 10 songs from the group's second studio album, Toulouse Street. Originally released in 1972, it's been certified platinum. Several of the band's most popular songs first appeared on the album, including "Jesus Is Just Alright" and "Listen To The Music," the latter presented here with a brand new arrangement featuring horns.

Next, The Doobie Brothers played its third studio release, The Captain And Me . Originally released in 1973, it reached #7 on the Album Chart and has been certified double platinum. Hits include "Long Train Runnin'," "China Grove" and "South City Midnight Lady." The show ended with a three-song encore that included their #1 hit "Black Water."

Encore:
Take Me In Your Arms (Rock Me)
Black Water
Listen To The Music (Reprise)