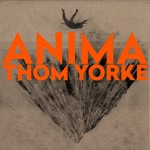 Thom Yorke's third solo album ANIMA, described by him in an interview as "dystopian", was written and produced in collaboration with Nigel Godrich and is accompanied by a short film of the same name: a "one-reeler" directed by Yorke and Paul Thomas Anderson.

"Yorke still likes glitchy processing and icy atmospheres. Instrumentation is used sparingly. Tracks are often sparse. His vocal approach tends towards abstraction over storytelling. But, of course, this all exists within the sonic realm of Yorke, one of the most immediately distinctive artists of all time. He's openly talked about how Flying Lotus influenced him and Godrich on this record, and Yorke's solo albums have all bore traces of electronic music artists he admires. But now, more than ever, him and Godrich are owning this space. It would be unfair to say Yorke was ever an outsider in electronic music, but on ANIMA the electronic sources feel like tools of expression rather than objects of curiosity, as they have sometimes seemed in the past." Resident Advisor