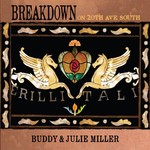 Their first album together in nearly 10 years, Breakdown On 20th Ave. South is an album of Julie Miller songs produced by Buddy Miller. As a couple and individually, Buddy and Julie have been nominated and received multiple awards including Grammy's, Americana Awards, Dove Awards among others. Julie Miller's songs have been recorded by a diverse range of artists including Emmylou Harris, Lee Ann Womack, Levon Helm, Solomon Burke, and Miranda Lambert.

Buddy Miller is known for his work as a guitarist, performing live and in the studio with artists such as Robert Plant, Alison Krauss, Steve Earle and Emmylou Harris. Buddy's production credits include albums with Plant, Harris, Earle, Patty Griffin, Shawn Colvin and many more.