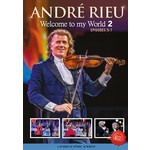 André Rieu is back with a brand new series! After the huge success of Welcome to My World the audience wanted more! So, the cameras returned to follow André Rieu and his Johann Strauss Orchestra on their latest worldwide tour, capturing all the action both on and off stage. It's a unique insight into the life of the most popular violinist in the world; from staging his first ever concerts in Romania to rehearsals with 150 waltzing couples and even organizing a wedding.

5. André Rieu : World Tour Join André and the Johann Strauss Orchestra on their grand world tour! In Chile he enthrals with an emotional performance of Besame Mucho, in Peru he wows with the epic Ode to Joy and he finds time to explore the vibrant city of Bangkok as he performs his first ever concert in Thailand.

6. André Rieu : Christmas in London André performs a Christmas concert in London filled with festive songs including ; O Holy Night, Hallelujah and Jingle Bells. André treats his orchestra to a Christmas feast and an evening at the Christmas market.

7. André Rieu : Making the Magic André performs his first ever concert in Bucharest and reveals the secrets behind his magical open air concerts. He is also joined by Romanian pan flute legend Gheorghe Zamfir for a special performance of The Lonely Shepherd.