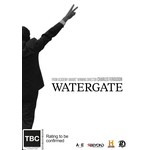 On the night of June 17, 1972, a security guard in the Watergate office complex in Washington, DC called the police when he found a door repeatedly taped open. The police discovered five men dressed in business suits who were in the process of installing bugs and photographing documents in the headquarters of the Democratic National Committee. Thus began the most explosive scandal in American history - a scandal that brought down the Presidency of Richard M. Nixon and sent over 40 people to jail.

From Academy Award® winning director Charles Ferguson, Watergate chronicles one of the biggest criminal conspiracies in modern politics, telling the entire story of the Watergate scandal from the first troubling signs in Richard Nixon's presidency to his resignation and beyond. This definitive documentary series features a roster of some of the most important media, legal and political figures from the scandal, including Carl Bernstein, Bob Woodward, John Dean, Jill Wine-Banks, Richard BenVeniste, among many others.