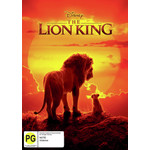 The Jungle Book director Jon Favreau helms this CG-animated re-imagining of the 1994 Walt Disney classic. Features the voice work of Donald Glover as Simba, Beyoncé as Nala, James Earl Jones as Mufasa (reprising his role from the original), Seth Rogen as Pumba, Chiwetel Ejiofor as Scar and John Oliver as the big-beaked Zazu. Score composer Hans Zimmer and song writer Elton John both return to re-work the original compositions.

After his father's murder, Simba, a young lion prince, flees his home only to have to learn the true meaning of responsibility and bravery.