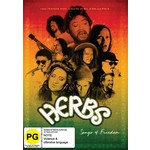 Director Tearepa Kahi's follow-up to the infectious Poi E is a rousing celebration of Pacific reggae legends Herbs, the band's members and its action as an inspiring musical front for social rights and harmony.

Almost 40 years after their first gig as the support act to Stevie Wonder, Kahi connects with core Herbs members as they reunite in preparation for an anniversary concert. Set against a soundtrack rich with the band's popular songs (including 'One Brotherhood', 'French Letter', 'See What Love Can Do', 'Nuclear Waste'), the documentary traces Herbs' backstory and brings it up to date.

Kahi gives founder Toni Fonoti, guitarist Dilworth Karaka and producer Hugh Lynn (among others) ample room to recall Herbs' creation and formation. With its unique mix of Māori, Pākehā and Pasifika musicians, Herbs had shifting iterations, at one point growing to 23 members.

Interviews, past and present, loop us back to social and political flashpoints such as the occupation of Bastion Point, the 1981 Springbok tour demonstrations, and the dawn raids targeting the Polynesian community. Reminiscences interweave with rehearsals and the concert itself, celebrating songs which harbour strong political messages within superb harmonies and distinctive South Pacific-infused rhythms. Their power and appeal remain undiminished.