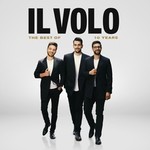 The sensational operatic trio, Il Volo, celebrate their 10th annivetrsary with the release of the stunning album The Best of 10 Years. This album includes previously unreleased version of some of Il Volo's greatest hits including 'O Sole mio and Surrender.

In June of this year, Il Volo performed a Best Of show in Matera, Italy - several of the recordings from this concert are included on the album.