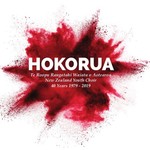 From Bruckner to Body, Mendelssohn to Mews, and Whitacre to Wehi to, this CD celebrates ensemble singing from the choral canon as much as the artistic voice of Aotearoa New Zealand's composers

The New Zealand Youth Choir was founded in 1979 and the first national choir for this age group in the world. A sound and indeed a unique choral culture was created and nurtured for choral singing in New Zealand through this national choir. Only four Music Directors over four decades have passed on the legacy from decade to decade while evolving the sound and responding to shifts in music, New Zealand culture and our communities' increasing diversity.

This album is an anthology, a historic record of this journey. From the very first concert in August 1979 in Upper Hutt to a 2019 live recording of a contemporary Maori waiata in Wellington, this is the musical story of our national youth choir and all the people who have sung in it, worked for it, funded and supported it and enjoyed it's music.

Recordings included in this album were made in London, Vancouver, Freising (Germany), Salt Lake City, Texas, and many fine venues around New Zealand.

Nearly 1,000 singers have been trained and sung in this choir. We salute all who have walked this path before us and the many who are still to come.

Waerenga a hika was recorded at the joint 60th and 40th anniversary concert with the National Youth Orchestra in Wellington. Der Tod das ist die kühle Nacht and Little Man in a Hurry were performed at St John's Smith Square in London on NZYC's 11th international tour. Steal Away is a live recording at Sacred Heart Cathedral in Wellington in 2013. Songs 5-8 are taken from the 30th anniversary concert at Wellington Town Hall in July 2009. O Salutaris Hostia and Cloudburst were recorded in 2005. Herr, erhöre meine Worte and Naseby were recorded for the CD Gaude/Rejoice in 2004. Ehre sei Gott in der Höhe and Lux Aeterna were performed live at the 20th anniversary concert in June 1999. Recorded for the CD Winds that Whisper were The Moon is Silently Singing and The Love Song of Rangipouri in 1998.