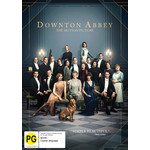 Adapted from the hit TV series Downton Abbey that tells the story of the Crawley family, a wealthy owner of a large estate in the English countryside in the early 20th century.

Excitement is high at Downton Abbey when the Crawley family learns that King George V and Queen Mary are coming to visit. But trouble soon arises when Mrs. Patmore, Daisy and the rest of the servants learn that the king and queen travel with their own chefs and attendants - setting the stage for an impromptu scheme and other shenanigans.