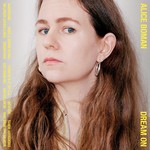 The profound sense of quietness that can be heard in Alice Boman's music stems from its simple roots. Initially a project that started at home when she was a teenager, the songs she was making were just "sketches". Yet as soon as other people heard them, it was clear that there was so much more to her talents than simple home tinkering. Two EPs followed, 2013's Skisser and 2014's EP II, as did a wave of critical acclaim and an array of TV placements for her music on shows such as Transparent, Wanderlust, and 13 Reasons Why. With her new reach, the Swedish songwriter captivated listeners one-by-one.

Boman wanted to introduce the nature of collaboration into this record, working again with Fabian Prynn and embracing a new creative dynamic with producer Patrik Berger. It's an interesting partnership given Berger's production history (Robyn, Charli XCX, Icona Pop, Santigold). But this is not a glossy pop album. Instead, Berger tapped into the core of Boman's sound and identity and elevated it to a new place.

The result is an album that radiates a thick fog-like texture, oozes melody and somehow manages to both uplift you and break your heart simultaneously. While Dream On may be rooted in the essence of collaboration and reaches new sonic destinations, it's also a deeply personal one.