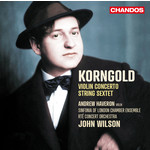 Korngold began work on his Violin Concerto in 1937, following his father's suggestion that the main theme from his score for the Errol Flynn epic Another Dawn would make a good basis for a concerto. The work remained dormant while Korngold was exiled to Hollywood after the Anschluss. He resumed work on it in 1945, and fully revised it. Premiered by Jascha Heifetz in 1947, the Concerto is widely performed and recorded, and is certainly Korngold's best-known concert work. Widely considered the greatest composer-prodigy since Mozart, Korngold composed the String Sextet in 1914, when he was only seventeen years old. It shows his fully developed style and assured idiomatic writing for the ensemble. Andrew Haveron leads the Sinfonia of London Chamber Ensemble in the Sextet, and is joined by John Wilson and the RTÉ Concert Orchestra in the Violin Concerto.

"This new iteration [Violin Concerto], impeccably played by Andrew Haveron, is notably enhanced by the sympathetic accompaniment of John Wilson and the RTE Concert Orchestra, the latter playing with suitably passionate commitment. The versatile Wilson, of course, has the full measure of Korngold's serious works along with his influential film scores, and that particular combination of skills services the music very well here. The composer's String Sextet is a welcome companion piece…" CD Choice (UK)

"There's a telepathy between them. And they have a very clear take on a piece born of Korngold's own intention that it be 'more Caruso than Paganini'. It sings...I love that there's a modesty about Haveron's performance. It's so easy to overcook this piece. His unaffected delivery is key here..[The Sextet] gets an absolutely cracking performance here from key members of Wilson's newly reformed Sinfonia of London led by Haveron" Gramophone Editor's Choice May 2020