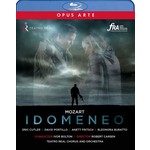 "Mozart's third venture into the "opera seria" genre, demolished its traditional boundaries to open the way to lyric drama. Blending youthful earnestness with mature mastery, Mozart uses - while profoundly changing - the elements of a genre based on arias that come one after another with no real concern for dramatic progression. The importance and expressive power of the choruses, influenced by the operatic reforms of Gluck, foreshadows The Magic Flute. Idomeneo is often regarded as Mozart's first masterpiece for the opera house.

After the fall of Troy, King Idomeneo can finally dream of returning to his homeland after a long absence, during which his son Idamante ensured the continuity of his reign and guarded Trojan prisoners, including Ilia, King Priam's daughter. To escape from a terrible storm that is keeping him from reaching Crete, Idomeneo promises Neptune to sacrifice the first living being he encounters upon landing. Unfortunately, it is his own son who greets him in his native land.By offering her own life in exchange for that of Idamante, whom she loves and who loves her, Illia manages to get Neptune to yield and to deliver Idomeneo from his fateful vow.

"The sound on the Blu-ray disc is excellent and gives plenty of weight to Bolton's superlatively engaged conducting. The production was commissioned jointly not only by Madrid's Teatro Real, but also by Toronto's Canadian Opera, Copenhagen's Royal Danish Opera and the Rome Opera, so this presentation, if not this cast, will presumably be familiar to viewers on both sides of the Atlantic. The film direction by François Rousillon is excellent." MusicWeb Recommended July 2020