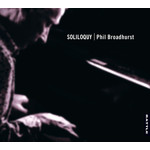 Recorded in November 2019 on the grand piano in his home, the tone of Phil's final album is fittingly intimate, reflective and introspective, but without ever becoming heavy, dark or sentimental. A 50-minute set of originals mixed with favourite standards and in-the-moment improvisations, this is Phil Broadhurst at his most restrained, but unmistakably affirmative best. The improvisations alone offer an intriguing glimpse into what might have been a strong new direction.

"After several successful concerts, private jazz parties and much teaching using our marvellous Yamaha grand, I felt it was time to pursue a long-held dream to record a set of solo piano pieces within the intimate acoustics of our home. Steve and John kindly set up a recording system that enabled me to record whenever the mood took me, and after hours of spontaneous recording in November 2019, we settled on a mixture of old favourites, of off-the-cuff improvisations, and several of my originals.

Thanks to all who helped make this project happen, especially my wife Julie and son Cameron for their support during this recording."