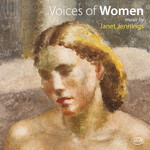 The album opens with a new musical setting of The Magnificat. Mary's song of praise is the longest New Testament text attributed to a woman, but was, of course, written by a man. Jennings describes the text as "troubling because the image of Mary has pervaded our culture and formed a guiding - and restricting - principle for female conduct". Musical settings of poetry by Christina Rossetti, Ursula Bethell and Jean Alison Bartlett form the body of the album. The lives of these three leading writers and thinkers spanned a period of 170 years. The poems reveal their preoccupations and concerns providing delightful moments of humour and moments of reflection.

The album is completed by the title work, Voices of Women, in which Jennings sets to music texts by Kate Sheppard, Charlotte Perkins Gilman, Ākenehi Tōmoana and Jacinda Ardern. The work begins with words from one of Kate Sheppard's most influential speeches of 1892. A poem follows, by American feminist Charlotte Perkins Gilman, published in 1911, that wittily summarises the arguments faced by those who fought for suffrage; her fellow countrywomen did not gain the right to vote for another nine years. The words of Ākenehi Tōmoana, a prominent Māori leader of chiefly status, advocate the inclusion of women in decision making. Kate Sheppard's words of 19 September 1893, when the Electoral act was signed into law, are followed by the words of Prime Minister Jacinda Ardern, speaking in parliament on the 19th September 2018, as New Zealanders celebrated 125 years of female suffrage in New Zealand.

The texts are sung by a stellar line-up of NZ vocalists that includes Stephanie Acraman, Mere Boynton, Catrin Johnsson, Jayne Tankersley and Felicity Tomkins, in an ensemble conducted by Rachael Griffiths-Hughes.