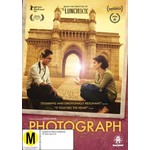 Ritesh Batra returns to the Mumbai streets of his festival favourite The Lunchbox (NZIFF14) with this delightful romance that doubles as a sensuous love letter to that bustling metropolis. The plot, in which a poor street photographer Rafi convinces a shy middle-class student Miloni to pose as his fiancée to fool his meddling grandmother Dadi, may sound like the stuff of Bollywood fantasy but Batra plays it with a graceful touch that proves deeply felt.(NZIFF)

"The film, which deftly touches upon such big-picture themes as class, religion, tradition, family and happiness, features a wealth of delicately captivating moments and observations… Miloni's sensitive relationship with her family's humble maid, Rafi's interplay with his buoyant friends and roommates (as well as their kindness and respect toward Dadi) and Rafi's heartfelt pursuit of the defunct brand of cola Miloni loved as a child…

Batra… captures the bustling, workaday sides of Mumbai life with vigor and passion while also treating us to several leafier, more urbane views of the city. Kudos to cinematographers Timothy Gillis and Ben Kutchins for the film's many burnished, strikingly composed shots. It's a beautiful, resonant film." - Gary Goldstein, LA Times

"Nawazuddin Siddiqui is subtle yet dynamic as Rafi. Throughout, his eyes reveal the intense feelings he's sorting through: the longing for Miloni, the love for his grandmother and his sense of how limited his own future might be. Siddiqui, who played the trainee who ingratiates himself with Irrfan Khan's character in The Lunchbox, is a major screen presence." - Caryn James, Hollywood Reporter