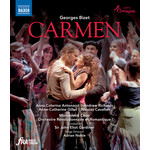 'Carmen' caused the most vindictive criticism: the libretto was deemed obscene - it foretold verismo - the orchestral score was described as 'Wagnerian', namely too lush though designed for the theatre's sixty instrumentalists. Director Camille du Locle himself, bewildered by so much music, deplored: 'Poor Opéra Comique! How much neglected it is now when one writes for it!'

Exhausted from working, deprived of a success Bizet hoped would have been dazzling, but convinced he had found his way through such a nonconformist piece, on 29 May Bizet bathed a bit too early in the Seine at Bougival. On 3 June 1975, the day after the 33rd performance of Carmen - indicating limited success as the receipts were meagre - he died from a heart attack, at the age of 36, like Mozart.

"We have a fine, rather traditional production, but there are two additional assets here in the persons of Anna Caterina Antonacci as Carmen and conductor Sir John Eliot Gardiner. Of course one must credit a healthy portion of Gardiner's success to his fine ensemble, the Orchestre Révolutionnaire et Romantique..using instruments from the latter quarter of the 19th century" MusicWeb Recommended