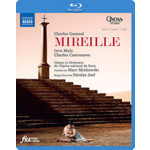 As soon as I was appointed Director of the Paris National Opera, I wanted to open my term of office with Mireille at the Palais Garnier opera house. In my opinion, Gounod was the greatest French musician of the 19th century, in no way inferior to Berlioz. And Mireille is undoubtedly his masterpiece - an opera of ineffable simplicity and delicacy, which puts the codes of opera into the background and allows emotion to blossom. Yes, Gounod was the musician of emotion, the noblest of emotion and he laid claim to it. It was an honour for me to introduce this work into the repertory of the Paris Opera where it had never been performed. Like Carmen half a century ago, Mireille came to the Palais Garnier opera house where it had its rightful place. Gounod is one of the tutelary figures of Garnier and this is where he created his last works, such as Polyeucte and Le tribut de Zamora. Finally, Mireille was also an opportunity for me to pay tribute to that great, noble poet, Frédéric Mistral, with a South of France culture that formed the basis for French sensitivity.

In this adventure, I had the good fortune to meet Marc Minkowski, a conductor in love with this music and who immediately understood the depth and the light. And I was again fortunate enough to be able to associate with it an exceptional artistic team: Ezio Frigerio - who was celebrating his return to Garnier after performances with Strehler and other notable triumphs, Franca Squarciapino and Vinicio Cheli. In addition, a generation of Frenchspeaking singers was ready to take over a tradition: Inva Mula, Alain Vernhes, Franck Ferrari, Anne-Catherine Gillet and Sébastien Droy. One of the most rewarding aspects of this production was to see the Opera orchestra and choir's enjoyment of this music and to find themselves immediately at home.